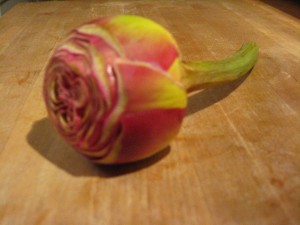 Few vegetables are as central to Roman cuisine as the round, prickly artichoke. My first weeks in Rome I visited the Ara Pacis. One of the most intact monuments remaining from Ancient Rome, the sides are covered with elaborate horticultural carvings. One of these plants looked familiar – there on the side of a 2000 year old building was the artichoke in full glory, some distant ancestor of the one that lay on my tuna sandwich mere hours earlier.

In modern Italy the artichoke is still going strong. You find it everywhere, in every course: spaghetti in an artichoke-cream sauce, grilled artichokes marinated in olive oil, artichoke pate on toasted bruschetta. If you’re in Rome in April, you can even attend the fair of the Roman artichoke – Sagra del carciofo romanesco – in the nearby town of Ladispoli. 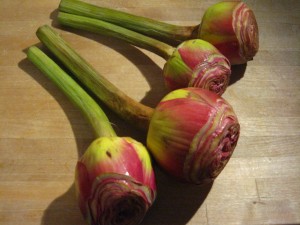 There are two artichoke dishes that reign supreme: carciofi alla giudea and carciofi alla romana. In America, artichokes are less common and more expensive than in the Mediterranean so any dish featuring the artichoke should truly showcase its flavour. Though both the roman and the Jewish artichokes are eaten either as a side dish or an antipasto before the main course, they tend to become the star of the meal. 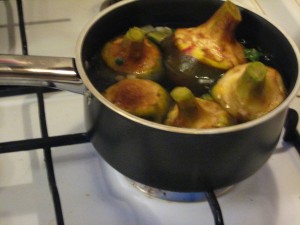 Carciofi alla giudea are the Italian equivalent of a bloomin onion – a globe artichoke deep fried into something utterly unhealthy and completely delicious. They are most commonly found in the old Jewish ghetto of Rome. Though most of the inhabitants who gave the neighbourhood its name have long vanished, the classic Roman Jewish cuisine is still alive and kicking in Da Giggetto and the other restaurants of the Jewish Quarter.

Carciofi alla romana use the smaller, violet artichokes. The tough, outer leaves are stripped away. The remaining artichokes are stuffed with a mixture of oil, lemon, garlic, parsley and mint. They are then braised until tender. The result is a simple, scrumptious dish easy to recreate at home. 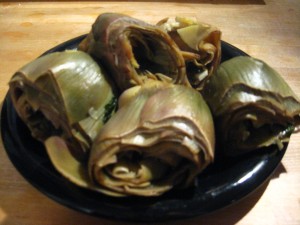 Note: The thinner, violet “Roman” artichokes are traditionally used but the dish will be delicious with the squatter globe artichokes as well. Carciofi alla romana makes a perfect side for a mild fish or chicken dish. Or serve it before the meal with good, crusty bread as an antipasto.

1. Discard the tough outer leaves and chop the stems of the artichokes off just below the bases. Firmly press each artichoke upside down on the counter to make it “bloom.” Scoop out the choke (the hairy white part) and place the cleaned artichokes in a bowl of water with the juice of 1 lemon squeezed in. This prevents the inside of the artichokes from becoming an unappetizing greyish-brown when exposed to the air.

2. Mix together garlic, lemon, herbs, and olive oil. Take artichokes out of lemon bath, rub the mixture inside, spooning any extra inside. Salt and pepper liberally.

3. Place artichokes side by side, like soldiers at attention, upside in a heavy-bottomed pot with 1 1/2 – 2 inches of water and a dash of wine. You want the artichokes close enough together so that they can”t tip over and bob around.

4. Cover the top of the pot with a damp paper towel and place a tight-fitting lid over that – this is to prevent any steam from escaping. Cook on medium for 30-40 minutes. The artichokes are ready when a fork pierces them easily. Remove the artichokes from the pot and set on a plate to cool. Once they are lukewarm, drizzle olive oil over them. You want to wait to add the oil until the artichokes have cooled a bit so that they don’t immediately suck it up and become soggy.