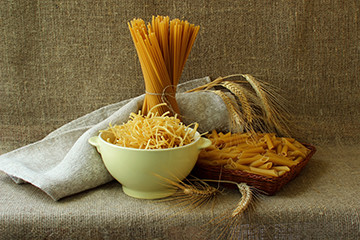 Ask a person about the first three words that come to mind when thinking about Italy, and almost always one of them will be “pasta”. This food so deeply rooted into Italian cuisine, can be found in any restaurant around the country and abroad, and has become almost a national symbol, which is often reflected in souvenirs brought by visitors back to their families. There are more than 300 distinct forms and shapes of pasta and even more dishes that can be prepared using it. In Italy pasta is eaten as a first dish and is always complemented with a specific sauce. Naturally, every city and region of Italy is boasting its own best recipes to prepare and consume pasta, and of course Rome is not an exception. In the Italian capital the traditional cuisine has developed around the tastes and means of the ordinary people, and so includes easily available ingredients and seasonal vegetables. When speaking about pasta, main components used in the Roman pasta dishes are tomatoes, eggs, black pepper, Pecorino Romano cheese and guanciale (pig’s jowl, from Italian guancia for “cheek”). 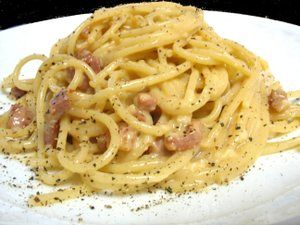 One of the most well known Roman pasta dishes served as frequently abroad as in Rome is Carbonara. Almost unanimously loved by the residents of the Eternal City, it was even further immortalized in the Italian movie “La carbonara” (2000) about a woman who runs a restaurant serving the dish. It is worth noting that origins of this Roman pasta are debated up to this day and several theories exist about the appearance of Carbonara, that have now made its way into the menus of so many restaurants.

The theory associated directly with the name is the one of the carbonari (Roman name for “charcoal burner”), who were supposedly using the ingredients found in this pasta to prepare their daily meals because of their widespread availability and ease of conservation. Having to spend long time tending the fire to produce the charcoal out of the carefully arranged wood, carbonari didn’t have time to be distracted and thus needed their meals simple and ready. However, supporters of the different theory duly note that Carbonara was not mentioned in any cuisine books until after the Second World War, and attribute its appearance to American soldiers, who ended up in Italy and having only bacon and egg powder with them created an easy recipe from the most familiar ingredients. The resulting dish was so delicious it was quickly adopted by Roman cooks. Probably because of this theory guanciale is sometimes substituted by bacon in this recipe, which is usually unacceptable in other Roman pasta dishes.

The type of pasta used to prepare this dish is usually spaghetti, and the list of ingredients includes eggs, guanciale, pecorino Romano and black pepper. Eggs are mixed with pecorino and pepper, chopped guanciale is fried and added to the mix. The Carbonara sauce is ready – just mix it with your spaghetti and count the seconds it takes for the plate to become empty! 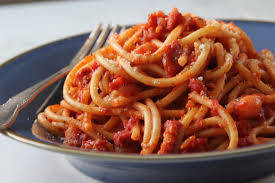 Another very well known Roman pasta is Amatriciana, which is actually called “matriciana” in Roman dialect. The funny fact is that despite being considered a Roman pasta this dish actually carries a name of the village of Amatrice, which is located in the province of Rieti, 2 hours away from Rome!

One essential ingredient which makes this pasta different from other Roman pastas is tomato. First time in gastronomic history the combination of pasta and tomato was recorded in the cooking books at the end of the 18th century, and the recipe quickly gained popularity in Roman taverns and inns. At that time the trade and business connections between Rome and Amatrice have been already developing for a few centuries and reached its peak time, and many tavern and inn owners were actually originating from Amatrice. So the name “Matriciano” was frequently used for describing an inn with the kitchen, and most of them served the pasta with tomato, a dish brought from their homeland. It quickly became a Roman classic since then.

Besides tomato also guanciale and pecorino are used for preparation of Amatriciana. Sometimes you can also find a little bit of onion added, but inclusion of this ingredient is highly debated. The typical pasta shape used for the dish is either spaghetti or bucatini (from buco – Italian for hole), which are similarly shaped but have a hole running through the center.

The perfect proof of Italians’ love for Amatriciana came in 2008, when Italy dedicated a postal stamp to the “Ingredients of the spaghetti all’amatriciana and the city of Amatrice” with the value of 0,60€. 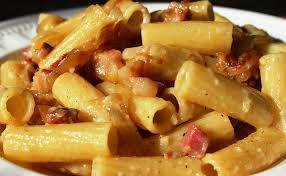 It is considered that the recipe of Amatriciana actually originated from a different pasta dish – before the addition of tomato it was just Gricia (sometimes also spelled Griscia). Principal ingredients of this pasta are just guanciale, pecorino and black pepper. Originating in the same area of Amatrice, it was mostly used by shepherds, who were following their herds into pastures for several days. They were bringing with them the ingredients that would be easy to conserve and quick to prepare – dry pasta, pigs jowl meat, cheese and peppercorns.

With regards to the origins of the name there are several competing theories again! One of them is geographical and is based on the resemblance of the name Gricia with the little village called Grisciano, situated close to Amatrice. Another theory claims that the pasta is called after gricio, a Roman name used in the 18th century for the seller of bread and other staple. Many of these sellers have moved to Rome from the Swiss Canton of Grisons and are believed to have given the name to the whole social group. 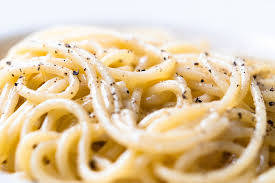 If you think that 3 ingredients for the pasta sauce are already too little, then you should not leave Rome without trying another amazing Roman pasta dish – Cacio e pepe. The name of this pasta translates to just “cheese and pepper” and that is just it – a dish based only on pecorino Romano and black pepper! Finally, the pasta born in the very heart of Rome, this recipe originated from the poor who didn’t have many sophisticated ingredients for their meals, and now made it to the tables and plates of all layers of society.

The only pasta in this list which is suitable for vegetarians, it needs not only the skill to prepare the creamy sauce but also the highest quality ingredients being such a simple recipe. The secret lays in adding some water in which the pasta was boiling to the mix. The starches from the pasta will make the cheese and pepper sauce creamy and it will coat the pasta evenly. The typical pasta shape used is tonnarelli, the shape of which reminds spaghetti, but has eggs in its ingredient list.

If you are feeling hungry and ready to devour these delicious dishes, here are some suggestions for locations where to find them. Please take a closer look at our Trastevere and Piazza Navona guides, where you can find all the information on the restaurants. Feeling adventurous enough to try cooking these Roman pasta dishes yourself? Here are the links to the most authentic recipes that we could find: