Rome encompasses an area of approximately 580 square miles, with thousands of fun things to do and interesting places to explore in every corner of the city. While many people are already well aware of Rome’s most famous tourist attractions, like the Colosseum, the Roman Forum, and St. Peter’s Basilica, there are plenty of lesser-known points of interest to spice up your vacation.

From ancient Roman architecture to modern, quirky restaurants, there’s a little something for everyone in Italy’s capital. So, if you are a traveller who prefers the road less travelled, there are plenty of things to see off the beaten path. Additionally, there are plenty of advantages that you don’t get visiting the high profile attractions. More often than not, you can avoid larger crowds, and maybe even spend less money at the same time.

But what are some of the best Rome tourist attractions that don’t attract large crowds? And what kind of experience do they offer their visitors? To help you make the most out of your Italy vacation, we have compiled the following information on some of the top hidden gems in Rome:

You’re probably wondering why we would include a relatively non-descript hill on this list; after all, Rome is full of absolutely awe-inspiring attractions, so what makes the San Gianicolo Hill so special? Well, the hill itself is not spectacular, but the view it provides is like no other. If you’re willing to take a little trek to the west side of the River Tiber and up to the Piazzale Guiseppe Garibaldi, you can get an absolutely breathtaking view of the city.

Once you’ve taken in the city skyline, you can enjoy the fresh air of the open park at the top of the hill. The Piazzale features a prominent equestrian statue dedicated to Guiseppe Garibaldi, an Italian general who helped unify the Kingdom of Italy.

Unless you’re fluent in Italian, you may have trouble pronouncing the name of this 17th century church to your taxi driver, as it is a mouthful (we recommend writing it down). However, once you start walking through this magnificent building, you will understand why it is so fascinating. Originally commissioned by Pope Urban VIII, this church looks like many others from the outside, but underneath is a different story.

When you enter the church’s crypt, it is separated into five, dimly-lit chapels. The walls and alters are adorned with the bones of over 4,000 friars and poor Romans who were buried there sometime between the 16th and 19th centuries. Many of the bones are arranged in elaborate designs, making the crypt a macabre work of art. While many “themed” restaurants can be a little cheesy and kitsch, La leggenda di Avalon is a remarkable and entertaining exception to the rule. The restaurant tries to recreate the experience of dining in a medieval castle, including a stonewall interior design, hardwood furniture, simple cutlery, goblets, costumed staff, and an authentically medieval menu. 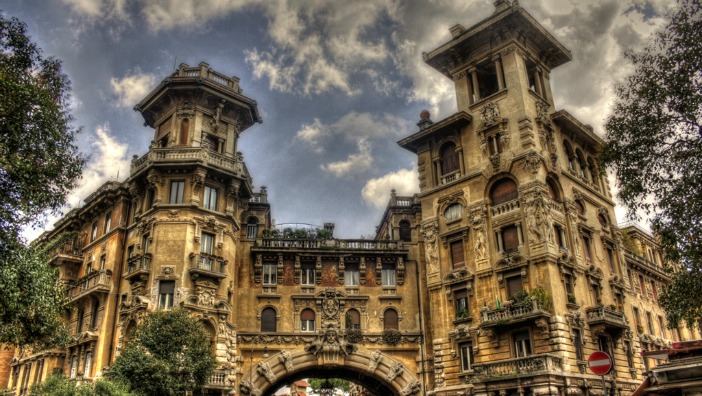 Whenever anyone mentions the Quartiere Coppedè, words like ‘fantasy’ and ‘whimsical’ are sure to follow. In truth, it is difficult to describe exactly what makes this tiny district so special. That said, as soon as you enter the Quartiere Coppedè, you feel as if you have stepped into an alternate world, with stunning visuals, architecture, and design.

The Quartiere Coppedè is technically the smallest district in all of Rome, but that doesn’t stop it from drawing in many passersby. The buildings have a distinct look all their own, with influences ranging from Art Nouveau to Ancient Greek architecture. The distinct style will make you feel as though you are walking through a fantasy land! After a long day of sightseeing, you might want to stop somewhere for a drink. Though there are hundreds of fantastic bars and restaurants in every corner of Rome, there are a select few that really stand out from the crowd. However, if you plan on grabbing a drink at Ice Club, you may want to bring some extra layers.

The interior of this trendy bar is made entirely of ice, and temperatures stay around -20°C. That may not sound too appealing for an extended period of time, but you are provided with a special thermal coat upon entering the bar to help tolerate the frigid temperatures. Needless to say, their top shelf vodka also helps! 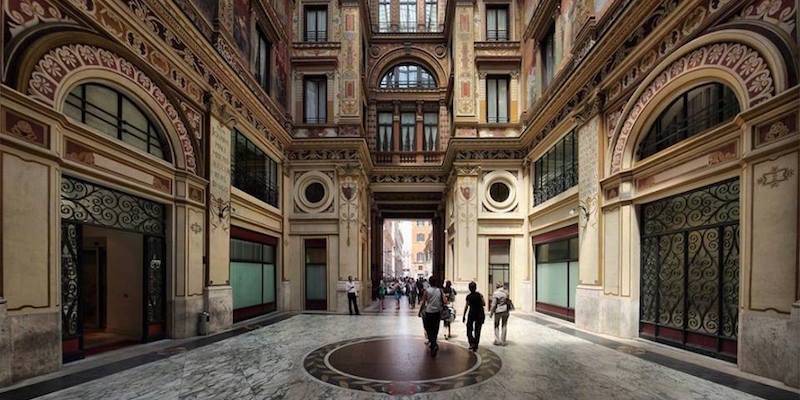 If you happen to be near the well-known Trevi Fountain, you’re only a few minutes away from the lesser-known Galleria Sciarra. This open air courtyard features a series of stunning frescoes by 19th century artist, Giuseppe Cellini. The frescoes all focus on the same theme: women. More specifically, these beautiful works of art represent the many different virtues of women, as well as the elegance of the female form.

The structure that encapsulates the courtyard functions as an office building, and the courtyard is open to the public during normal business hours. Thanks to its central location and ease of access, this is one of the best (and cheapest) ways to see gorgeous 19th century art in Rome. 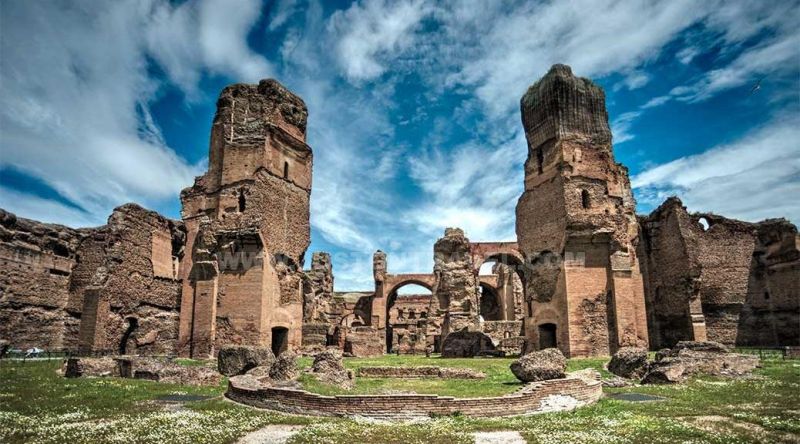 As with most locations on this list, the Baths of Caracalla are off the beaten path, so it will take a little longer to get there. However, it is well worth the trip. The Baths of Caracalla offer an amazing glimpse into the life and architecture of ancient Rome. Though only ruins remain, these were once the second-largest bathhouses in all of Rome.

The structures that still stand are enormous, towering overhead as you enter the ancient complex. Nowadays, small tour groups can walk through the cavernous hallways, learning about the history of the region.

Just a short walk from the Spanish Steps is the Keats-Shelley Memorial House, a small, hole-in-the-wall museum dedicated to various poets of the Romantic period. John Keats actually lived in the building for a short time, up until his death from tuberculosis in 1821. Today, the museum functions as both a monument to artists and a library containing both originals and copies of past works.

Whether you just want to have a look around the beautifully-designed building, or sit down and read through poems from some of history’s most beloved writers, the Keats-Shelley Memorial House is a must-see attraction.

It can be overwhelming to consider all of the amazing historical sights and attractions in the city of Rome. And even if you’re not a history buff, there are plenty of beautiful locales and fun activities for tourists of all ages. Whether you want to lounge in a library that once housed a famous poet, or take a trek out to the bathhouses of ancient Rome, you will want to prepare for what could be the most amazing trip of your life. To learn more about some of the best tourist attractions in Rome, contact RomeLoft today!